Once upon a time, there was a boy who was playing on dry land and caught a big turtle. He intended to kill it, but he did not know how to do so. Therefore, he asked someone and he was told, "You just throw it into the water and he'll be killed at once."
The boy believed the words and cast it into the water. Once in water, the turtle swam away.
This is also held to be true with the common people.
Hoping to protect their six sense organs and consecrating themselves to meritorious works, people do not know how to do so. Accordingly, they begin to ask others how to bring about deliverance. To them, the heretics, Maras, the evil ones and the wicked friends say in their words, "You just have to be fond of the six sense organs and indulge in the Five Desires. As I'm telling you, you'll get deliverance."
Such stupid men follow these words without deep thinking and fall into the Three Evil Paths of Transmigration on the dissolution of the body after death.
This is just like that boy throwing the turtle into the water. 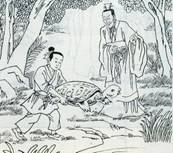